Is the official name of our Detachment We thought it appropriate to give you a brief history of the man we choose to honor, by naming our Detachment after him.

Moore enlisted in the Marine Corps in February, 1942, and was shipped overseas the following December, to the Pacific area in World War II.  He participated in the Bougainville and Guam campaigns, as well as the one on Iwo Jima.  The Long Island Daily Press, a New York paper, on Thursday May 17, 1945, had the following head line, and story, giving accounts of Moore's actions.

MARINE CORPORAL FROM JAMAICA BLASTS JAPANESES OUT OF PILL BOX
Marine Corporal James F. Moore, 19, son of Mrs. Alice G Moore of Jamaica, blasted four Japanese out of a pill box and killed a Japanese with a pistol during the bitter fighting in Iwo Jima.  Corporal Moore, a demolition man with a company of the 21st Marine Regiment of the Third Marine Division, was in on the big push for Motoyama Airfield Number Two on D-Day-plus four.

He was a member of a platoon ordered to destroy three pillboxes situated 200 yards beyond the defense lines of the Marine Regiment.  The pill boxes were staggered on a hill 150 feet apart.  Each squad was assigned to destroy one of the pillboxes.

During a lull in a heavy Japanese artillery barrage, Moore with his squad made a frontal assault on the first pill box.  Machine-gun fire from inside the pillbox killed one of the squad members and wounded two more as the Marines advanced through a gully towards the pillbox.  Twenty yards from the pillbox, members of the squad threw hand grenades at the cement fortress.  The Japanese lobbed hand grenades back to the Marines.

Moore called for his assistant with a flame thrower.  The flame thrower failed to operate. Moore said:  "I knew then that I would have to do the job alone.  I guess it was a silent order."  Armed with 20 blocks of TNT attached to the end of a pole, Moore advanced to within feet of the pill box.  He ignited the fuse and threw the charge in to an underground opening leading to a anti-aircraft gun emplacement.  Four Japanese inside two pill box were killed.  Moore's squad then joined the two other squads, aiding into destruction of the two remaining pillboxes. Four Marines were killed and five wounded in taking of the three pill boxes.

Upon another occasion, Corporal Moore, standing watch in a foxhole, saw a Japanese emerge from a brush pile near the command post.  Taking his personal side arm, an old cavalry--type 45 calibre revolver, he fired at the Japanese who was 20 yards away.  Wounded they fell to the ground.  He arose and staggered within 15 yards of Moore's foxhole.  A second shot struck the Japanese in the head, killing him instantly.  The dead Japanese had two hand grenades clutched in his hands.

Moore was one of three men in his company who underwent the Iwo battle without suffering any battle wounds.
Corporal Moore was awarded the Bronze Star Medal for heroism during the battle for Iwo Jima.  After the war, and when he returned to the States, Moore served as an honor guard escorting fallen comrades home to their family and burial at home.  He helped console the families and showed them Marines care for each other.

When the Korean war was in progress, he served in Korea, freezing his butt at the Chosin Reservoir.  It was there he contacted rheumatic fever, and spent many months in St. Albans Naval Hospital.

He then went "Sea Going" serving aboard the USS Wilkes-Barre.  While at sea they sailed around the world on a "Good Will Cruise."  During this cruise he participated in the Honor Guard at King Christian of Denmark's funeral. 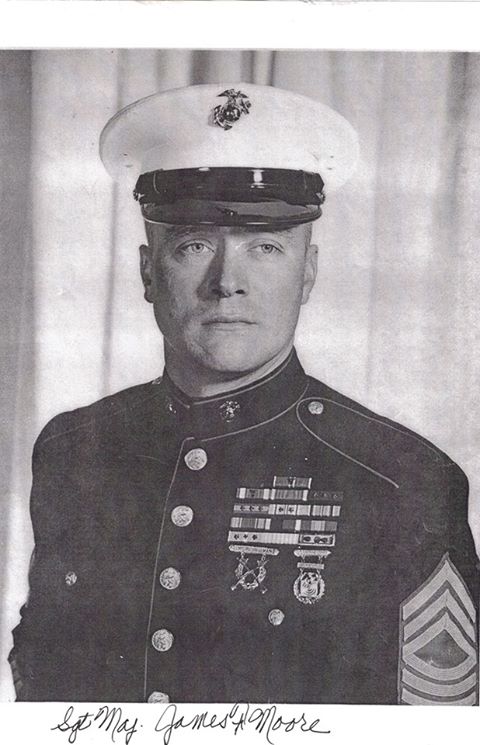 Michael K. Worsham, 76, died suddenly and quietly at his winter residence in Summerfield, Florida on April 6.  A proud Virginian and man of the Sourth, he was born and bred in Richmond.  Mike was a cadet at Benedictine High School (class of 1957) and remained a devoted supporter of Benedictine throughout his life. He and many of his classmates gathered regularly in Richmond.  To help  support his widowed mother, Mike took a job with C&O Railroad in Richmond, then in Huntington, West Virginia.  Mike joined the Marine Corps in December 1960 after prodding by his good friend, a Marine recruiier, Jim Rubenstein.  After Parris Island and infantry training at Camp Lejeune, he spent six years in the Marine Reserves, first with the West Virginia 83rd Rifle Company, then in Greensboro, North Carolina, before being discharged in 1966.
In 1957 Michael had met Jacqueline Boggs in Altavista, Virginia and there was a immediate, mutual attraction that triggered a 5-year long-distance, phone and letters courtship.  They knew early on that they would marry, and did so on 14 July 1962 at Holy Cross Church in Lynchburg, thus beginning a beautiful life together. Mike had a long career with Reynolds Metals *1966-1993) and was also co-owner of Business Products(1970-72) and a licensed real estate agent.
The Worshams moved permanently to Reedville and the Bay in 1995.  The had developed close ties with their neighbor Col. Charles Lamb, USMC (RET), a China Marine, fighter in Nicaragua, member of Carlson's Raiders and Navy Cross recipient.  Because of their close relationship, Lamb gifted militaria to Michael which he donated later to both the Parris Island Museum and Raider Museum at Quantico.
Michael Worsham was a founding member of Marine Corps League Detachment 1062, a proud Marine, and our commandant in 2004.  He was a worker and enjoyed boating, vegetable gardening, genealogy, his Irish heritage, politics, the stock market, playing poker and bridge, Civil War history, the company of other Leathernecks, a good joke, grits, barbeque and having his back scratched.  He ha very rich life.
Mike will be missed by many and it will not be the same without him.  He was buried on 21 April in the family plot at Mr. Calvary Cemetery in Richmond.  Rest in Peace, fellow Marine.  You will not be forgotten.